Facebook iOS App Crashing for Users After Latest Update [u] 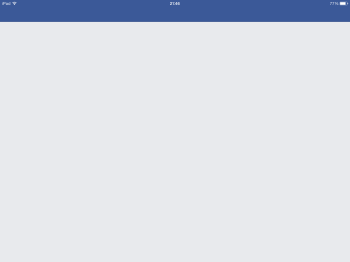 Facebook has pushed out version 6.7 for iOS yesterday, an update that was aimed to enable the ability to edit posts and tap to see all changes on the iPad. However, the update brought more bugs than enhancements: Since updating to the latest version of Facebook, the app crashed in just a few seconds.

Our readers have notified us about this bug, so we decided to test it. We have been able to reproduce the crash on an iPhone 5s and iPad 4, both of them running iOS 7.0.3. In fact, on the iPad 4 the Facebook app crashed less than a second after being launched.

A usual workaround for this type of bug is to delete the app and then reinstall it, but the app crashed even after a fresh install.

Looks like Facebook’s site is experiencing service disruption as many users report crash on iOS7 App on Apple devices, according to a tweet.

Are you experiencing this issue?

Thanks to everyone who sent this in!

Update: the app appears to be working now for some users.