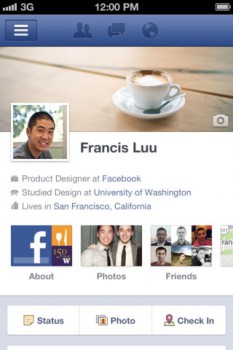 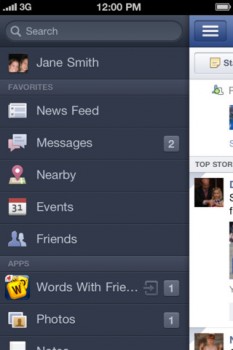 Today, Facebook has updated their iOS app, bringing it to version 4.1.1. This update brings numerous bug fixes, retina display support for the new iPad, and a few other features

In this release, we added some features and fixed some bugs so now:
– You can go offline in chat
– The right profile picture appears for everyone
– Your list of friends always includes all your friends
– In sets of photos, your name is displayed correctly
– Photos of people who like Facebook Pages load correctly
– Your friend-request notification only lights up if you have a request
– You can change your language to Czech, Danish, Greek, Indonesian, Malaysian, Norwegian (Bokmal), Portuguese (Portugal) or Thai
– If you’ve got a new Retina iPad, you’ll see a crisp, high resolution interface

Oddly enough, the iPad version of the app does not have the Timeline view, when looking at someone’s profile. With the whole of Facebook making the switch to Timeline, you would think Facebook would have included that for the iPad, in this latest release. Timeline has been a part of the iPhone app for quite a while now. For those of you who don’t like the recent Facebook changes, maybe the iPad app is what you are looking for.