Facebook has released version 5.0 of its Messenger iOS app, which adds improved ways to send photos, plus adds the ability to send videos from your camera roll.

Videos now play right in the app and photos can be sent in one tap without leaving the conversation. As for stickers, users can now tap and hold to download sticker packs from friends.

Video: Send videos from your phone’s camera roll and when people send you videos, play them right in the app.

Instant photo sharing: Take a photo and send it in just one tap, without leaving the conversation.

Shortcuts to stickers: When someone sends you a sticker, press and hold down on it to get the pack.

Improved search: Enter the names of people and groups to find them quickly.

Other fixes, including to stickers and groups.

As you can see below, the new ability to send pictures is very fast as the camera view replaces the keyboard portion of the app. All you have to do is tap the ‘Send’ button. It’s a smart way to send photos seamlessly, but you won’t get second chance to undo: 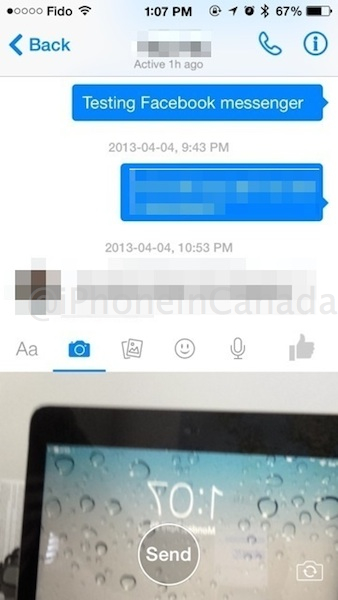 Ten days ago we saw Messenger get updated with the ability to create Groups. The app has come a long way since debuting in August of 2011 based on the Facebook’s acquisition of Beluga Messenger.

Facebook is reportedly forcing users to download Messenger separately and set to remove the messaging feature from its main app. It seems to be a plan for Facebook to pad up Messenger downloads and have it look and feel like a standalone app to compete in the messaging app space. It can already send text, images, videos, audio messages and stickers.