Last month Facebook announced the coming launch of their App Center to iOS, a dedicated section to allow users to download apps for the social network. At the time Facebook encouraged developers to create their ‘app detail page’ prior to the launch of App Center. Now, it appears App Center has started to leak out early, as spotted by TechCrunch. There is an app-themed press event going on tonight at Facebook, so we could see the launch of App Center soon.

Users have started sending in images of App Center and its implementation into the Facebook iOS app. App installs appear on the left sidebar under a separate titled section. 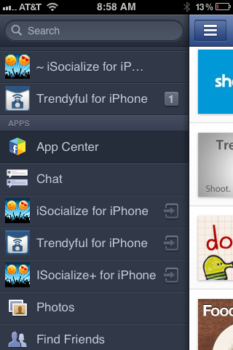 Facebook has recently launched other iOS apps such as Facebook Pages Manager and Facebook Camera. I’d like to see the actual Facebook app continue to improve and become polished before the social network continues to release numerous redundant add ons. The Facebook iPhone experience should at least match or exceed the web experience.

Anyone out there spot App Center within the Facebook iOS app? Send us screenshots to tips [at] iphoneincanada.ca