Google+ today has gone public for everyone, and part of their explanation of what’s new, Vic Gundotra mentioned Hangouts will soon be supported in the Google+ iOS app.

Hangouts is a multiuser video chat and will be enabled for all front-facing devices such as the iPhone 4. The new feature will be available today for Android devices. Check out the preview image below to see what iOS users can soon expect:

92. Hangouts on your phone

In life we connect with others in all sorts of places, at all different times. And the connections you make unexpectedly are often the ones you remember the most. We think Hangouts should keep pace with how you socialize in the real-world, so today we’re launching it on the one device that’s always by your side: your mobile phone. To get started, simply find an active hangout in the Stream, and tap “Join”: 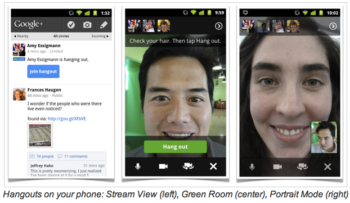 Hangouts currently supports Android 2.3+ devices with front-facing cameras (and iOS support is coming soon). The new mobile app is rolling out to Android Market today, so you can start hanging out at any time, from just about anywhere.

With Google+ now public, it’ll be interesting how the new social network will evolve. Since joining Google+ I have barely checked it after the first initial few days, due to the lack of users available. Are you still using Google+?