Google Maps for iOS was released a couple days ago and shortly after its release it vaulted into the number one spot under top free apps. Three Google apps are in the top 10 now: Google Maps, YouTube and Google Earth:

Google is pushing its iOS maps app release hard. Even Google Maps on the web shows ads for the newest iOS app: 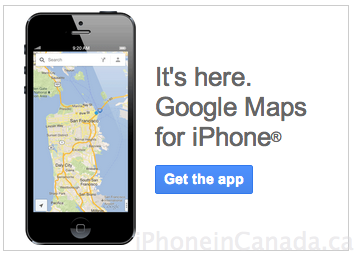 After testing out the app, I must say it’s one heck of a 1.0 release by Google. The vector maps load quickly and it’s really great to again be able to have accurate search results when it comes to business listings. The design influences are simple and I like how street names stay level even as you’re manipulating views.

Some observations and tips and tricks:

Apple’s plan was for their own mapping service to be, if not as good as Google’s, at least good enough that it didn’t make us miss Google’s map data. I think Apple — where by “Apple”, I mean the company’s collective executive leadership — is seething regarding the way this has played out. Everything from Apple Maps being the butt of jokes to the accolades and joy that have accompanied the release of the new Google Maps iOS app. Seething.

Lots of people out there speculate Google’s refusal to introduce turn-by-turn and vector tiles was a move to make Android better. But according to Gruber’s sources:

They were withholding those features as a negotiating tactic to get Apple to integrate iOS Maps further with Google’s services. (This I’ve heard from numerous sources, from both sides of the negotiations.)

Whatever theory you want to believe about how Google Maps is affecting iOS users and Apple, the bottom line is we now have an alternative to Apple Maps. Google Maps is back on iOS.

How are you liking Google Maps for iOS?