The Pokémon GO trend is far from over, and if you can’t beat ‘em, join ‘em, right? In order to find Pokémon, the game requires users to walk around in the real world (instead of inside on a sunny day), looking at their phones (and risk their lives too?).

There’s one way to become a Pokémon GO master: leverage the app Poke Radar for iOS, which is a crowdsourced app that helps you reign in on the Pokémon hotspots using Google Maps.

While Pokémon spawn at random places, using the app will provide you with a higher chance of nabbing specific critters at dubbed ‘hot spots’. You know, the areas where hundreds of people congregate with their heads buried into their iPhones.

Poke Radar allows users to submit where they found specific Pokémon, placing their locations on a map, with even options to give you walking directions. Pokémon locations are only shown by those submitted in the past six hours, with options by users to up or down vote locations, to clamp down on fake or bad submissions.

Below is a screenshot of Poke Radar showing downtown Toronto: 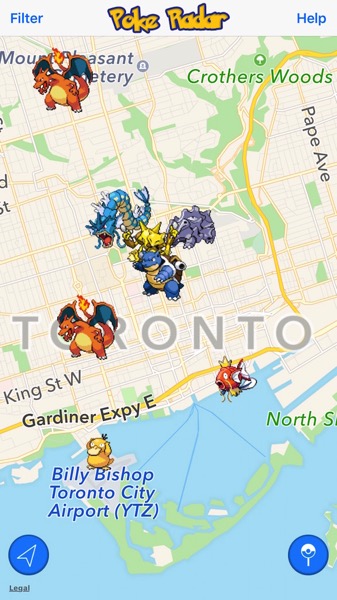 Poke Radar is also on the web, but the servers have been overwhelmed, meaning it’s offline, despite a full night of server maintenance by the developers.

However, the iOS app still works fine, and is currently behind Pokémon GO as the top free iPhone app in the App Store: 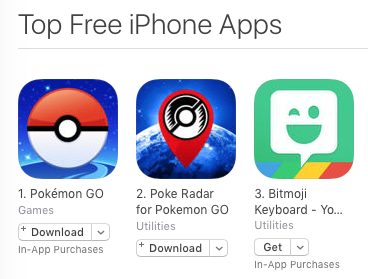 If you want an edge on your friends and family, click here to download Poke Radar for iOS in the App Store—it’s free. Let us know how you like this app!