Apple Debuts ‘Made in Toronto-Waterloo’ Section in the App Store

Last month, Apple launched a new series in the App Store called ‘Made in Canada’, which will feature apps made by developers coast-to-coast. Vancouver was the first debut city, and today we now have the second: Toronto-Waterloo. The theme as we move across the country is Canada 150, ahead of our nation’s 150th birthday.

“If Canada has its own Silicon Valley, it’s the high-tech corridor linking bustling, diverse Toronto and sleek, savvy Waterloo. With a thrumming hub of talent fuelled by these cities’ world-class universities, this dynamic duo takes us to dizzying heights — the alpine snowboarding of Alto’s Adventure, the cloud accounting of FreshBooks, and much, much more.” 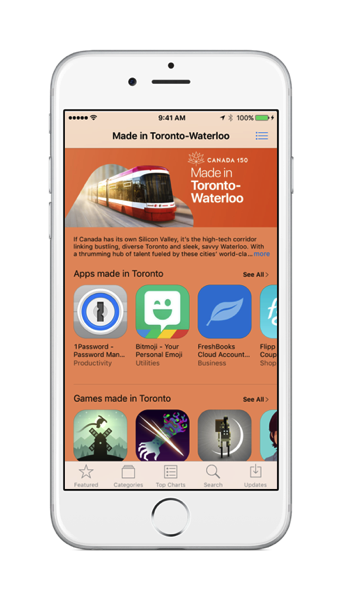 Made in Waterloo
Made in Ontario
Download links for Toronto-Waterloo: English; Francais