Mailbox has released an updated version of its popular Gmail iOS client to send attachments from Dropbox. The company announced this earlier today at DBX (the company’s first developer conference) and shared details of this new addition on the company’s blog:

For those of you who couldn’t join us today at DBX we’d like to share our announcement from the conference. You can now use Mailbox to easily send attachments from Dropbox. It’s as simple as adding a photo—just look for the paperclip icon next to the camera at the bottom of a new message. 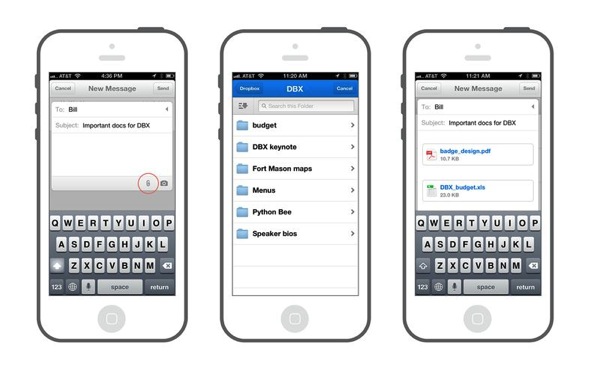 How to add a Dropbox attachment? As stated, tap the paperclip and you’ll have access to all of your Dropbox folders and files. This is fantastic news if you work on the go and need to send files saved in Dropbox.

Considering Dropbox acquired Mailbox back in mid-March, in a deal reportedly worth $50-100 million dollars, the integration we’re seeing today in the updated app doesn’t come as a surprise. In May, Mailbox released an iPad version of the app.