Last month when Facebook held their f8 conference, they also announced their plans to support App Links, an open source tool which allows developers to easily link content between their apps.

Mailbox for iOS has received an update today which brings support for App Links, making the Dropbox-owned company one of the first early adopters to support it. Here’s their explanation of how App Links will make your life easier:

Imagine someone sends you a Pinterest pin in an email. If you have the Pinterest app installed on your phone, just tap the link in Mailbox and it will open in your Pinterest app rather than Safari or Chrome. You get to access information on your mobile device the way you want — and not through the default web view.

And it’s not just for Pinterest: links from other apps that use the free open-source tool will work the same way. Did someone send you a SoundCloud link to a new remix? Just tap on the link and you’ll go directly to the SoundCloud app on your phone instead of a page on the mobile web. It’s simple and automatic.

This is fantastic that Mailbox (well, Dropbox) has jumped on board early to support App Links. There’s nothing worse than opening a link and have it jump to your browser instead of the app already installed on your iOS device. Other supporters of App Links include companies such as: Quip, Spotify, Goodreads, Flixster, Redfin, Endomondo, Hulu, Wattpad, Venmo, and MovieTickets.com.

We tested out the update and it works pretty great. Links within Mailbox after today’s update will open the Pinterest iOS app right away, whereas Mail and Gmail will launch Safari and Chrome and present you with the following screen, adding a step: 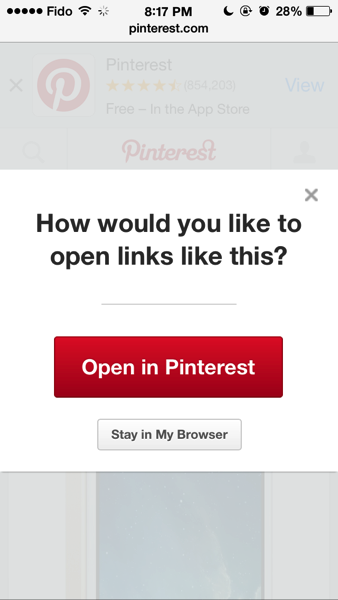 App Links is a free open source tool that’s cross platform and made for mobile–can’t wait for more developers to jump on board.