Today is a big day in the gaming world, as Mass Effect 3 hits stores. This long awaited sequel brings the battle to earth on Xbox 360, PS3, and PC. EA has not left out iOS gamers though, as they have also released a completely separate Mass Effect game in the App Store. 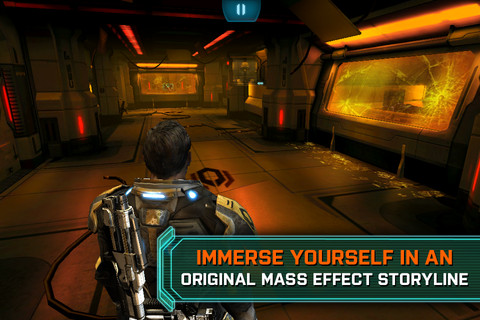 THE FATE OF THE GALAXY LIES IN THE BALANCE! From the makers of the critically acclaimed Dead Space on iOS comes an all-new, original Mass Effect storyline – made exclusively for mobile!

YOU’RE A CERBERUS AGENT – GONE ROGUE!
As Commander Shepard battles Reapers across the galaxy, veteran Cerberus agent Randall Ezno procures aliens for illicit experiments at a secret facility. But when the Director of the facility goes too far – Randall fights back and vows to bring Cerberus down!

Can you fight your way off the hostile Cerberus base and deliver their secret research to the Alliance?

ENTER A NEW DIMENSION IN iOS GAMING
Move freely through massive exteriors and a fully realized Cerberus base. Featuring groundbreaking graphics and intensified audio, enjoy a console-like experience that marks the next leap in iOS gameplay.

IT’S YOU AGAINST AN ARMY!
Harness the fury of high-tech armor and weapons. Unleash biotic powers, stealth cloak abilities and devastating melee attacks. Upgrade your gear and performance with credits – the quicker and more stylish your kills, the more credits you’ll earn.

IMPACT YOUR MASS EFFECT 3 EXPERIENCE
Gather valuable intel and upload it to Galaxy at War to boost your Galactic Readiness Rating in Mass Effect 3. Complete the game to increase your War Assets. Improve your chances in the final Mass Effect 3 battle – on the go!

Crush Cerberus and shape the future of the galaxy. The outcome depends on YOU in Mass Effect: Infiltrator!

You can pick up Mass Effect: Infiltrator in the App Store now, for $6.99