Apple Maps is still a sore spot for the company. The mixed reception to the mapping app resulted in CEO Tim Cook publicly apologizing along with the firing of iOS chief Scott Forstall and other iOS directors responsible for the snafu.

When Google Maps finally launched back in mid-December, it was a sigh of relief for iOS 6 users unhappy with Apple Maps. The app was well-designed by Google and came with turn-by-turn voice guided directions, a feature made long available for Android versions of Google Maps, and also the suspected reason why the latter was ditched by Apple.

It now appears developers have started to add options for Google Maps to be opened instead of Apple Maps, as seen in the latest update to the Meetup iOS app: 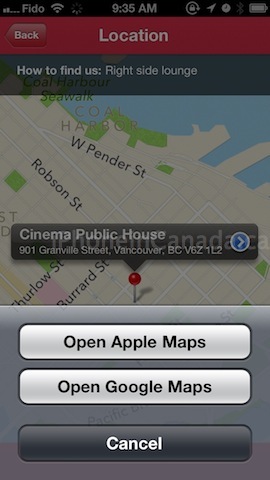 This is something I’d like to see being implemented more in iOS apps that require directions. A choice to open Google Maps directly instead of going to Apple Maps by default, or even Google Maps on the web first. The latter quickly replaced Apple Maps on my home screen and I haven’t touched it in a long time.

The Google Maps SDK for iOS was made available with the launch of the app, so expect further implementation for directions in the future.

Google Maps or Apple Maps? Tell us what you’re using in the comments.