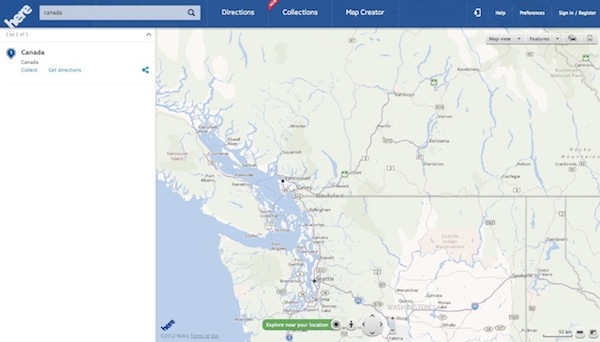 AllThingsD is attending Nokia’s press event to announce their new cloud-based mapping service, “Here”. Nokia confirmed it had acquired Earthmine, a California-based 3D mapping company, which will help them get more accurate maps. Nokia will be getting map data from a variety of sources and the Here service crowdsources data from users for real-time fixes.

As for their upcoming iOS maps app based on Here–some details are below as noted by AllThingsD:

Nokia planning an iOS mapping app that puts its HTML5-based service into a native app. That will require Apple’s approval, which Halbherr said the company expects in the next couple of weeks. It sounds like that Here app will have voice guided walking–but not driving–directions.

He then notes the iOS experience saying Nokia is doing that on the off-chance there might be a few iPhone owners that want better mapping. He shows live traffic, public transit and other features not found in Apple maps. There are turn-by-turn driving directions, but the voice-guided navigation is only for walking.

Clicking on a spot in the iOS app will bring up the 25 most popular places nearby. In some cases, such as malls, Nokia has in-venue maps.

Given the SNAFU with Apple Maps in iOS 6, alternatives are quietly waiting in the wings, such as an iOS version of Google Maps, which some employees suspected Apple would not approve.

Update: Here is more info about the app via Nokia. The app will be here “in the coming weeks”:

To further extend its location services, Nokia is launching a maps application for iOS under the HERE brand. Based on HTML5, it will include offline capabilities, voice-guided walk navigation, and public transport directions. The application is scheduled to be available for free download from Apple’s App Store in the coming weeks.