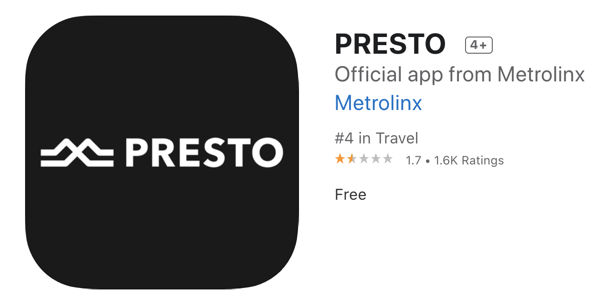 PRESTO on Thursday updated its iPhone and Android apps to now allow travellers to reload as little as $0.05, removing the previous $10 reload requirement.

This means those reloading cards can now pay specific amounts below $10 when topping up. The change also applies to PRESTO online, too. Last year, PRESTO removed the $10 minimum load requirement at retail stores but now the change has reached its digital apps and the web.

Another feature is a ‘remember username’ feature, allowing the app to save your name during the login process.

Coming soon, “PRESTO is introducing immediate balance protection in the event that a customer’s card is lost or stolen,” explains the company, set to launch this weekend.

Previously, lost or stolen cards would result in a 24 hour wait period, but now immediate balance protection means customers won’t be “responsible for any charges that may be incurred on it.”

Back in June, PRESTO for iPhone added support for real-time card loads, by using NFC on an iPhone 7 or higher by tapping the back of the device.