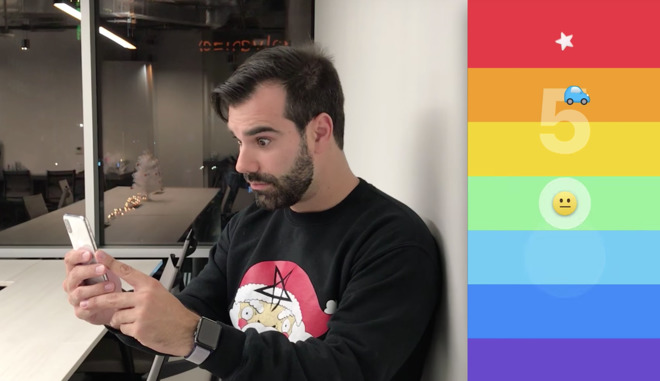 A new game, called “Rainbrow,” made specifically for the iPhone X uses the TrueDepth camera system to control the gameplay by monitoring the user’s eyebrows.

Rainbrow is a relatively simple game, where players have to move up and down a rainbow-coloured play area and collecting as many stars as possible. At the same time, players have to time their movements to avoid items crossing the screen from side to side, as a collision ends the game.

The game increases its difficulty by requiring the player to change their expression to move the character. Raising their eyebrows in surprise raises the character up and frowning pushes it down the screen, while a relaxed neutral expression stops movement.

Developer Nathan Gitter, a Washington University computer science graduate, said he has plans to add more to the game in the future, with integration into Apple’s Game Center.

The “Rainbrow” privacy policy advises the app only uses the depth data from the TrueDepth camera for gameplay purposes, with data stored temporarily on the iPhone X while the game is being played, and without the facial data being transmitted from the iPhone elsewhere at all.

Rainbrow for iOS is available as a free download from the App Store. The app requires any device running iOS 11.0 or later and now supports devices without a TrueDepth camera system, which for now is only iPhone X.