RBC Mobile for iOS has gained a new feature today, expanding its capabilities with Siri to let the virtual assistant pay bills for you.

All you have to do is tell Siri something like “Pay my RBC Avion bill”, and the assistant will ask “how much?”, then you respond with an amount and confirm when you want it to take place. Siri will confirm the payment, which users then validate with Touch ID. 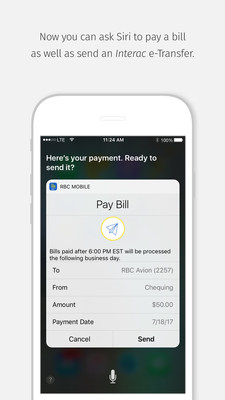 “Our clients are avid users of Interac e-Transfer payments, and embraced our launch of money transfers using Siri earlier this year. By giving clients the ability to seamlessly and conveniently bank using voice commands, we’re delivering simple and innovative solutions.”

RBC says in the past year, they’ve seen an increase of over 20 per cent in active mobile users, claiming it’s a “clear indication that more Canadians are using the RBC Mobile app to bank whenever and wherever they want.”

Check out the demo of Siri paying bills in the RBC Mobile app below:

Click here to download RBC Mobile for iOS in the App Store. Let us know if you try this out.