If you jailbreak your iDevice, you may have heard about an awesome app from Ryan Petrich called Display Recorder that allows you to record video of your iPhone’s display. It has been in the Cydia store for years now and is a very useful tool.

Now is seems developer Bugun Software has taken this idea, built their own app, and released it in the App Store using the exact same name. Over the weekend, their version of “Display Recorder” was released, including many of the same features in Ryan Petrich’s app that he has had in Cydia for a long time. Bugun release is buggy and the recorded video is quite choppy. Ryan Petrich’s version (the original) records smooth, high quality video. Here’s a side by side screenshot from Petrich’s Display Recorder (on the left) and Bugun’s Display Recorder (on the right). 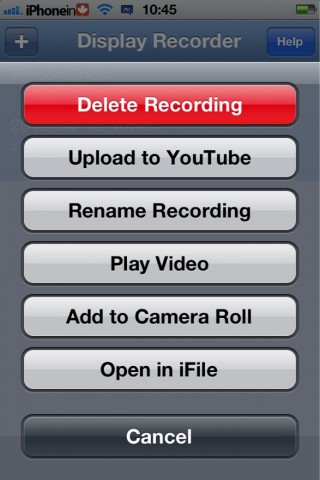 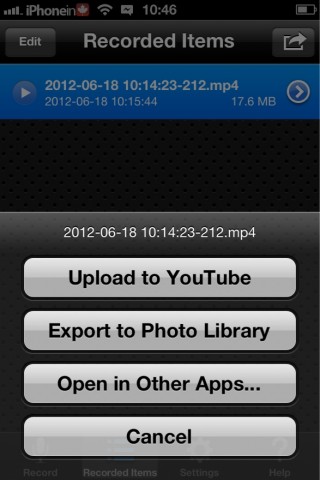 Here’s the features of both Display Recorder apps. On the left is Ryan Petrich’s app from Cydia and on the right is Bugun’s app from the App Sotre: 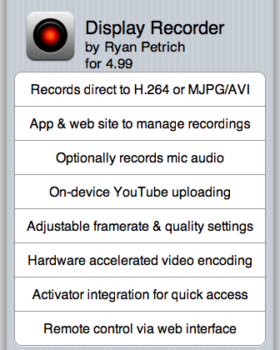 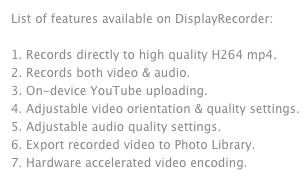 It is unclear if Bugun stole Petrich’s code for their app, but it is quite obvious that they stole the idea and most definitely stole the name. Petrich posted on Twitter today, that he has filed a complaint with Apple.

Some reports are claiming that the new App Store version has some features that the Cydia version does not, but it has all the same features as Ryan Petrich’s version. Cydia’s Display Recorder can record mp4 video, which is viewable right on your device, and it can also simultaneously record audio from the mic. I tried Bugun’s version today, and I gotta say it is no where close to as good as the original that Petrich released a long time ago.