In December of last year Shaw announced they had undergone WiFi trials in Vancouver, Calgary and Edmonton at various malls, restaurants and other retail venues to offer free WiFi for its existing customers.

You might have already downloaded this, but the Shaw Exo WiFi Finder iOS app hit the App Store a while back and enables customers to easily find Shaw WiFi zones. These free zones allow existing Shaw customers to get free internet beyond their home and the coverage is growing daily across cities in Canada.

Once you connect and authenticate to a Shaw WiFi zone, you do not need to reconnect once you enter another zone as it becomes automatic. For those with 500 MB data plans or WiFi-only iPads, this added service from Shaw looks pretty good to me. The app was recently updated to bring Retina Display graphics and iPad support, along with compatibility with the iPhone 3G 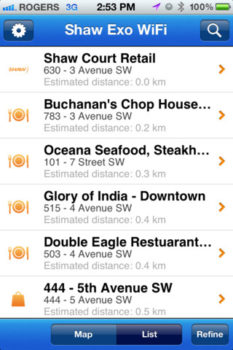 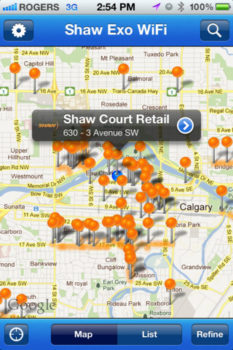 Anyone using the Shaw WiFi zones? How do you like it so far?