The Winnipeg Jets have recently released their official app for iOS which can be downloaded for free from the Canadian App Store. The passionate fans of the Winnipeg Jets can now follow their team on-the-go with the official app for live scores, player bios, stats, league standings, Jets photos, content from Jets TV as well as Facebook, Twitter and fan blog updates.

Here is the full iTunes description:

Download for free and stay in touch while on the go with live updates via social stream, photos, video, team news, player and league stats.

It’s the essential information source for the true Winnipeg Jets fan. Preview the entire schedule or stay on top of the current game box scores. It’s all Winnipeg Jets and it’s all at your fingertips.

Download the app and get the following:
– Jets interactive schedule and results
– Up to date scores, stats and standings
– News and Videos
– Player cards, bios and stats
– Game photo 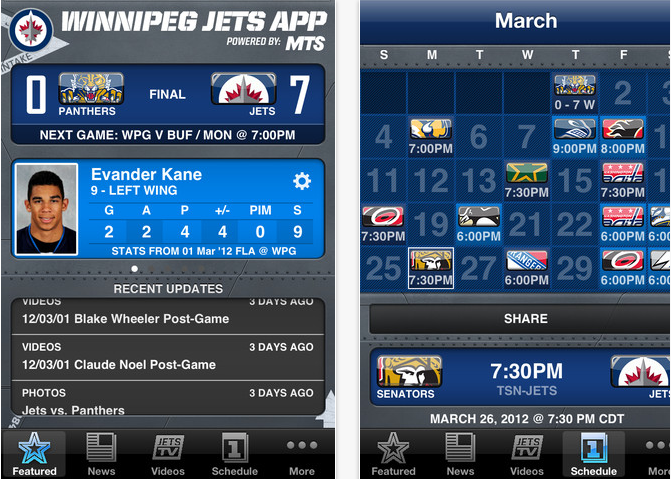 The Jets made their way back to Winnipeg this season (formerly the Atlanta Thrashers) after leaving in 1996 to become the Phoenix Coyotes. The current app was developed by Atimi, the makers of numerous other NHL iOS apps (such as the Calgary Flames app):

“We knew fans were excited about the return of the Jets and so we wanted to connect with them through a platform that offered a high level of interactivity, while making in-depth information from the league available and easily accessible as it happens,” says Stan Kurtas, VP Marketing, MTS. “With the huge success of the other Atimi-developed team apps for the NHL, we knew Atimi was the ideal partner with the most expertise in the realm of mobile marketing for sports teams.”