This summer we saw PC Financial and TD Canada Trust’s UGO Wallet venture offer customers a free $20 dining card if they signed up and added a loyalty card to the iOS app’s digital wallet. That offer has now returned, in what appears to be an offer emailed out to TD Canada Trust customers (via RFD). 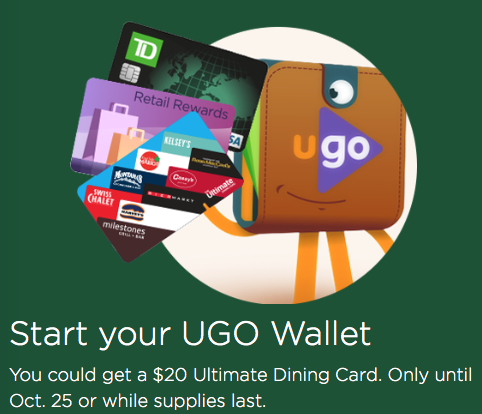 To sell your soul for a $20 meal, you’ll have to register for UGO Wallet, download and install the iOS app (it won’t work on jailbroken devices), and add a loyalty card (i.e. Air Miles, SCENE Card, PC Plus, etc) or gift card to the app by October 25, 2015. The fine print says it’s available only for the first 6,500 participants. Let us know if you’re going to try this.

If you’re considering a loyalty card app, many people use Stocard, which was updated this spring to support Apple Watch.