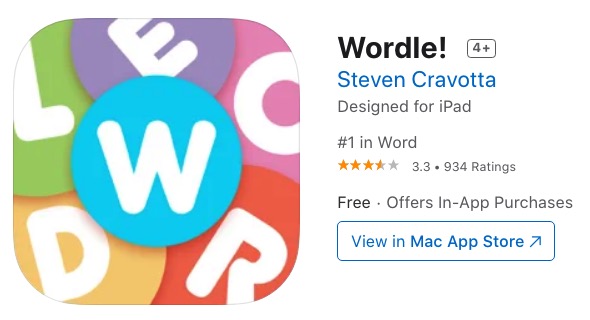 Created nearly five years ago by Steven Cravotta, a daily puzzle game ‘Wordle’ has suddenly blown up in popularity with over 200,000 App Store downloads this week alone, riding the popularity of the browser-based game with the same name.

In a series of tweets, Simpson shares how publications like The New York Times and Wall Street Journal helped his app reach the limelight, on the tails of the Wordle game by Josh Wardle.

“I built an app called Wordle when I was 18 mostly for fun, to sharpen my coding skillz, and maybe make a quick buck,” he said. “Its user growth slowly declined to 1-2 downloads a day for the past 4 years…. Until 1 week ago when I logged into my dashboard and was SHOOK at what I saw.”

Steven initially thought someone had ran a bot script and artificially sent downloads to the wrong app. “But after a quick google search I realized I was very wrong.”

came across my app, also conveniently named Wordle. My Wordle app has gotten 200,000 downloads in the past 7 days and its not even slowing down yet. I reached out to @powerlanguish to see if we could donate the proceeds I have gotten. pic.twitter.com/xZjjWhFHBe

According to Cravotta, he said on Friday he has teamed up with Wardle to donate proceeds from his iOS app downloads to the charity, Boost! West Oakland.

Can confirm that @powerlanguish and I have decided to donate the proceeds to @BoostOakland! Very excited to support such an amazing program that focuses on literacy for youth! We feel the money will make a real impact here!

Will keep you all updated throughout this process!

Apple has also taken action against apps that cloned Wordle and has already pulled a majority of them from the App Store.