Zynga has used Canada as a launch pad to debut its new game, Dream Heights (plus another game called Dream PetHouse). This game is based on the construction of your own tower, which comes across as a blatant rip-off of the hit game, Tiny Tower, developed by NimbleBits. You may recall Tiny Tower was chosen by Apple’s Game of the Year for 2011.

NimbleBits has responded to Zynga’s game by responding with a sarcastic letter on twitter that resembles a massive side by side comparison of both iOS games. NimbleBits is a small indie developer that consists of three people versus the more than 2700+ employees at Zynga.

Here’s a snippet of the graphic (click here for the full version): 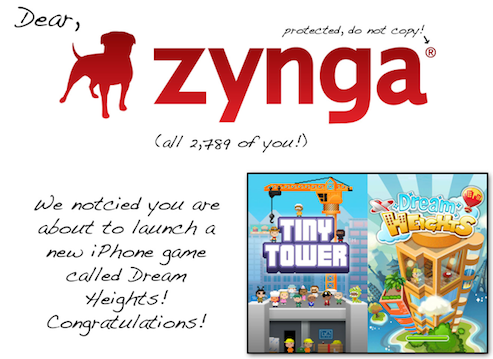 Take a look at this video of Dream Heights here:


…and here is Tiny Tower:


This isn’t the first time Zynga has been accused of being ‘inspired’ another game. Yesterday we wrote about how their hit game Words With Friends managed to topple the popularity of Scrabble. So, what do you think? Is Dream Heights a blatant copy of Tiny Tower?