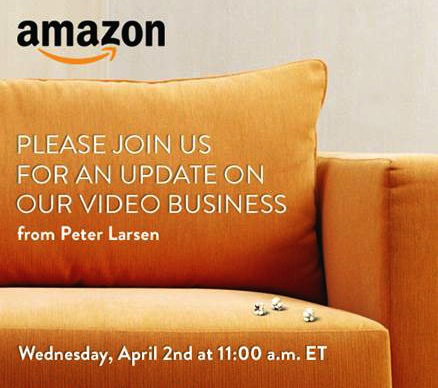 After long months of rumours about the Amazon set-top box that is set to challenge the Apple TV, Roku, and Google’s Chromecast, the device appears to be ready to take its share of the market. The online retail giant has started sending out invites to the press to an April 2nd media event, Re/Code reports.

The Amazon invite reads “Please join us for an update on our video business,” an event that will be held on Wednesday, April 2, at 11:00 am in New York and hosted by Peter Larsen. The accompanying image already suggests that the e-commerce giant will release the rumoured device.

Earlier, Re/Code reports said that Amazon has been working on the set-top box for much of the last year and initially planned its release for the Christmas shopping season, but it ultimately delayed the release.

The set-top box was foreseeable as the online retail giant has been investing heavily in a Web video catalogue and even started producing its own shows.

Earlier this month, TechCrunch heard that Amazon has opted for a dongle-like device similar to Chromecast. When it launches, the device is expected to carry a variety of apps available on Roku and Apple TV.

Will you jump on it when it becomes available in Canada?