Former WSJ journalist Jessica Lessin reports that Apple has tapped another mapping company in its efforts to bring the Maps application up to its own high standards. The latest acquisition is a small Silicon Valley startup, Embark Inc., which builds free transit apps aimed at helping smartphone users to navigate public transportation. 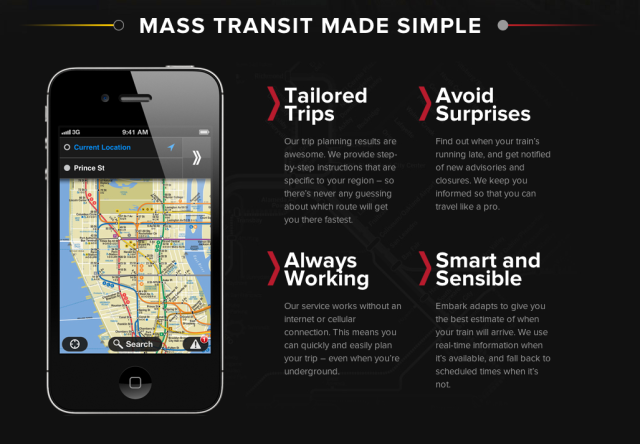 The amount paid for the two-person startup wasn’t disclosed, but according to Jessica Lessin’s sources, Apple plans to integrate the team and the Embark technology into its Maps application.

As the Embark website highlights, the apps developed by the team are aimed at making transit simple: it provides step-by-step, region-specific instructions, and real-time information about public transportation.

The deal was confirmed by an Apple spokeswoman, who said exactly what we would have expected to hear: “Apple buys smaller technology companies from time to time, and we generally do not discuss our purpose or plans”.

Embark is backed by Silicon Valley seed funds Y Combinator, SV Angel, and BMW Group, and has more than 500,000 users, but the company had struggled to put together a great business plan, which was apparently a key factor to its sale, according to sources.

Apple is definitely working to improve its Maps application, and the addition of Embark’s technology, which provides real-time public transportation data, would be a great addition to it alongside other improvements such as the recently patented Waze-like feature.