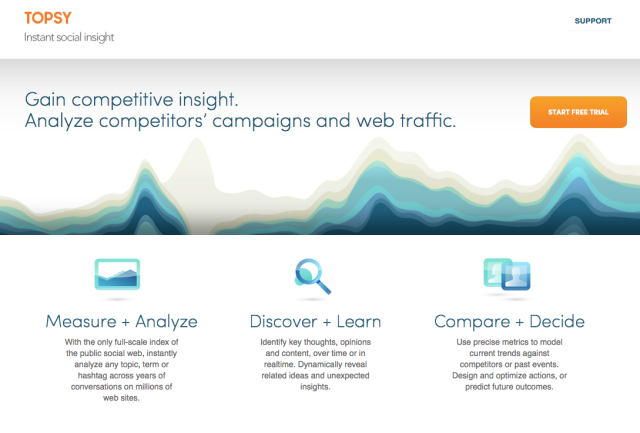 Apple Inc. AAPL has acquired social-media analytics firm Topsy Labs Inc. for more than $200 million, according to people familiar with the matter.

Topsy specializes in data from Twitter, offering tools to analyze tweets and other information to help track consumer sentiment. Its tools can decipher how often a specific term is tweeted, find an influential person on a specific subject, or measure the exposure of an event or campaign.

With this acquisition, Apple continues its foray into social media, as Topsy is one of the limited Twitter partners granted access to the “full stream of all tweets posted to the service.”

The acquisition sparks a new wave of speculation over Apple’s plans with its recent acquisition, and the WSJ is the first one in line. Given Topsy’s insight into Twitter data, Apple could use it to alert iTunes Radio listeners to songs trending on Twitter.

In another scenario, Apple could use Topsy’s technology to deliver real-time data to marketers, which they can use to sell targeted ads on iTunes Radio. As the newspaper points out, Apple was having a hard time attracting marketers for its iAd platform.

Speaking with the WSJ, an Apple spokeswoman confirmed the deal with the usual comment but remained silent about the details and the company’s future plans.

In a recent interview, Apple engineer Esge Andersen discussed how the company achieved improved sound quality regarding the AirPods Pro 2. Much of the improvements came without the integration of lossless audio and it is all thanks to improved airflow instead. Speaking with What Hi-Fi?, Andersen pulled back the curtain about the improvements to audio...
Steve Vegvari
15 hours ago