The guys from the “infamous” Onion News Network have the ultimate and eagerly awaited news: Apple is fixing the criticized iOS 6 Maps . . . well, sort of. They are rearranging the planet; they’re moving London to Canada so you can save the money and time you’d otherwise spend it on traveling. 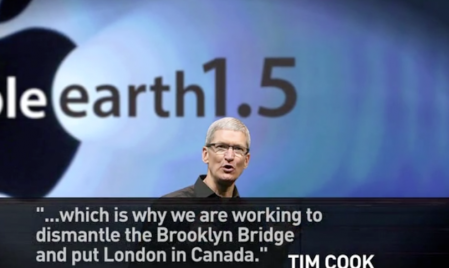 In this funny video, you’ll be informed that Apple is promising a must-have update by Christmas, which will obviously fix iOS 6 Maps’ unreliable mapping results by altering the geography of the Earth.

iOS 6 Maps had its share of success: it successfully pushed the overall consumer satisfaction down, and forced many users to jailbreak their device for a downgrade to iOS 5.1.1, which still features the Google Maps application.

Apple is currently on track to double iPhone exports from India by March 2023. This pace was first kickstarted in April and is continuing as India proves to be a major asset in Apple's diversification of its supply chain. In the five-month span since April, Apple has gone on to cross the $1 billion mark...
Steve Vegvari
11 hours ago