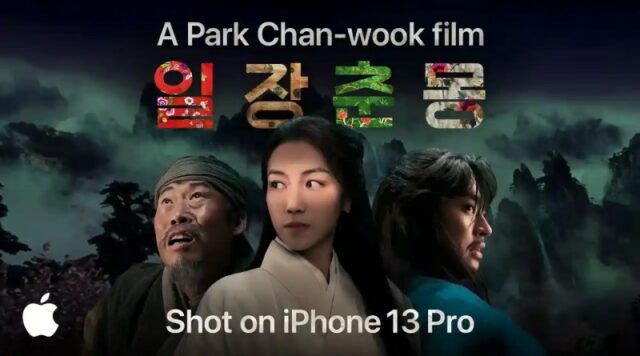 Apple has debuted a brand new short film dubbed ‘Life is But a Dream.’ The 21-minute film was created by famed South Korean director Park Chan-wook, who is best known for directing ‘Oldboy,’ Sympathy for Mr. Vengeance,’ and most recently, ‘The Little Drummer Girl.’

Apple commissioned the film to show off the power of the iPhone 13 Pro and its ability to capture stunning shots. Chan-wook’s short shows us an intimate look at an undertaker who begins to build a coffin for the saviour of his village. Upon doing so, the undertaker accidentally awakens a ghost of an ancient swordsman.

In classic Chan-wook fashion, the short features a number of cinematic shots and well-choreographed scenes. It’s certainly worth sitting down and watching through not only for the story but as the tension escalates.

On top of releasing a short film, Apple debuted a behind-the-scenes featurette demonstrating how the entire production was put together. It also shows the various rigs and film techniques used with the iPhone 13 Pro.

Apple has continually supported these Shot on iPhone short, with another being developed by Zhang Meng for Chinese New Year. Although I appreciate Apple’s boldness in showcasing the power of its own device, there are so many other aspects that go along with it producing a short film like Life is But a Dream. You have to have the appropriate lighting, equipment, and general knowledge of cinematography as well.

December 1st marks World AIDS Day and Apple is continuing to support Global Fund in its worldwide fight to stop AIDS. In doing so, Apple Stores around the world are promoting (PRODUCT)RED displays and products. Additionally, Apple is promoting apps, videos, and other materials on its products to help increase visibility. Since 2006, Apple has...
Steve Vegvari
21 hours ago