For the seventh year in a row, Apple has topped Fortune’s annual list of the “World’s Most Admired Companies”. The tech giant was followed by Amazon and Google, which ranked second and third, respectively.

Why it’s admired:
The iconic tech company known for the iPhone and other stylish and user-friendly products is back in the top spot on this year’s list, for the seventh year in a row. Apple, the most valuable brand on the planet according to Interbrand, brought in $171 billion in revenues in FY2013 and is flush with cash, but fan boys and girls (not to mention the market) are getting antsy to see its next big product. Bets are on a smartwatch or AppleTV, but the company is also reportedly turning its attention to cars and medical devices. — Erika Fry

The “Most Admired” list is the result of a survey of executives, directors and analysts, who rate companies in their industry according to nine criteria, from investment value to social responsibility. 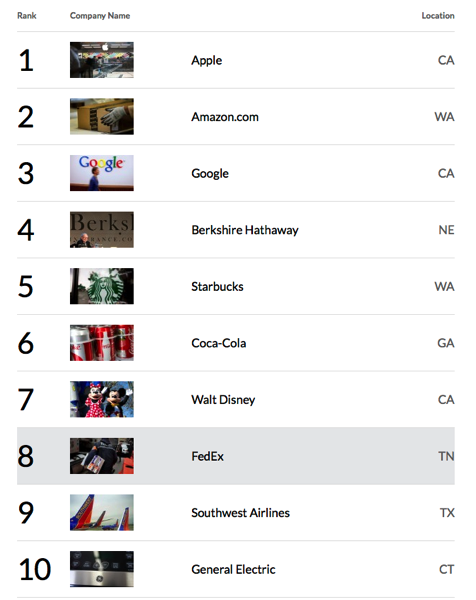 To produce the 50 Most Admired Companies list, the Hay Group – Fortune’s survey partner – asked nearly 4,000 respondents to select the 10 companies they admired most from a list that ranked in the top 25% in last year’s survey, plus those that finished in the top 20% of their industry.