Non-practicing entities (NPEs), or in other words, patent trolls, have attacked Apple the most (alongside HP and Samsung) during the past five years, according to Michael Brody, a Silicon Valley lawyer speaking at the Hot Chips conference at Stanford University on Tuesday (via TechHive, Tinh te). 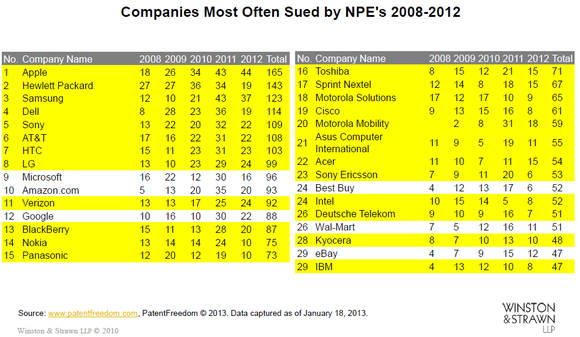 Considering that patents accounted for about 5% of all US exports in 2009 ($89.9 billion), and the number of chip patents — as measured by Winston & Strawn, an intellectual property company vice chaired by Brody — is rising at an accelerated pace (125,000 software patents are filed annually) this market attracts patent trolls.

To put it simply, a patent is nothing more or less than a license to sue someone, Brody said. “As a result, the generator of all the economic value that we are looking at is simply that right, that right to create those lawsuits and the value generated by those lawsuits.”

Suits fled against larger companies tend to demand higher amounts of damages; the mean resolution cost, including damages and the cost of the settlement, totaled $7.5 million for companies with over a billion dollars in revenue, and $7.8 billion for those over $10 billion in revenue.

That assumes the cost to defend each suit ranges from $800,000 per suit for startups to an average cost of $7.9 million for the those firms with over $50 billlion of annual revenue. (The median cost of those suits was much lower—$540,000—for the largest companies, indicating that the cost of just a few suits was over $10 million.)

And the number of lawsuits is high: last year alone more than 4,200 separate companies or individuals were sued by NPEs. And the harm they cause looks like this if we convert it to money: in total, the annual cost or “troll tax” for defending NPE lawsuits is $1.04 million annually for those firms with annual revenue under $1 billion, to up to $57.67 million for those with revenues over $50 billion, Brody highlighted.

You may recall that a company recently successfully settled a lawsuit with a patent troll. And the list of companies/patent trolls with lawsuits against Apple is very long.