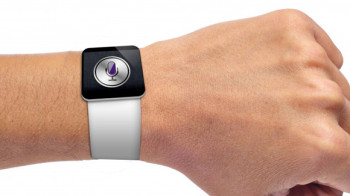 Bloomberg is the latest media outlet to report Apple is allegedly working on smart wrist watch device, similar to what previously was reported by the WSJ and NYT:

Apple Inc. has a team of about 100 product designers working on a wristwatch-like device that may perform some of the computing tasks now handled by the iPhone and iPad, two people familiar with the company’s plans said.

The team, which has grown in the past year, includes managers, members of the marketing group and software and hardware engineers who previously worked on the iPhone and iPad, said the people, who asked not to be named because the plans are private. The team’s size suggests Apple is beyond the experimentation phase in its development, said the people.

According to sources, James Foster, the senior director of engineering and Apple program manager, Achim Pantfoerder, are part of a team to launch and produce a wristwatch-style computer. The sources go on to say Apple had created prototypes for wearable devices related to tracking fitness before, but were never introduced to the market.

The popularity of the Pebble smartwatch has led many to believe the market is ripe for new types of wearable devices. In a recent interview with CNBC (via AppleInsider), Pebble founder Eric Migicovsky said he could not comment when asked if Apple or other companies had approached his company about acquisition offers:

“I think what’s going on in the smartphone space right now is we are seeing more and more devices work with the smartphone and so with the massive market share that Apple has on the smartphone side, seeing other devices connect to the smartphone — almost as like a central part of connection to the Internet — I think it’s a pretty big opportunity,”

Speculation has arisen Apple is set to jump into the wearable device market, with some analysts believing the company could release an “iWatch” to take over the iPhone and smartphones in general. Just last week Apple’s founder of the Human Interface Group shared his thoughts on what an Apple ‘iWatch’ could entail.

Are you ready for a wearable Apple device, such as a smartwatch?