Hot on the heels of the hype around innovation and a new Apple product, the US Patent & Trademark Office granted Apple a patent application on Thursday (via Patently Apple) that reveals a wearable computer in the form of a bracelet that could double as an iWatch. 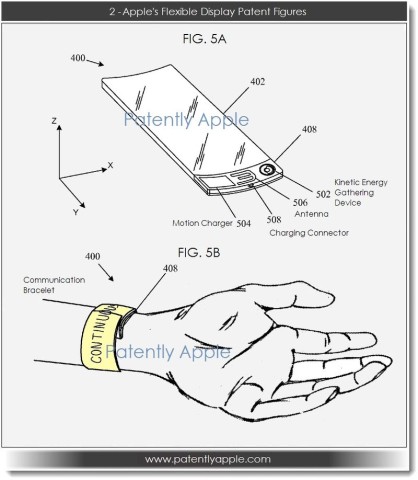 From what we’ve learned from the patent description, this is a clear hint that the much-rumoured and highly anticipated iWatch is at an advanced stage of development. The wearable computer sports a multitouch display, and the user can “accomplish a number of different tasks, including adjusting the order of a current playlist or reviewing a list of recent phone calls. A response to a current text message can even be managed given a simple virtual keyboard configuration across the face of the flexible display.”

But there is much more. You may recall that Apple has several patents for using solar energy, and wrist watches have a habit of using replaceable batteries. Even smart watches, such as the Pebble need to be plugged in to the charger at least once a week.

Well, from Apple’s perspective, this isn’t the smart watch you are going to wear. Their solution for an outstanding user experience: Solar panels and kinetic energy.

Apple’s patent describes a wearable video device as well, including the following:

Other possible features of the device included in the patent application include using it for night time bike ride lightning, edge lightning to configure a colored backlit border, and the ability to quickly view maps.

Is this something you would buy when it becomes available?