Turns out Apple is playing around with the idea of using curved glass in the iPhone. According a recently granted patent, the Cupertino company has developed a glass-bending process. 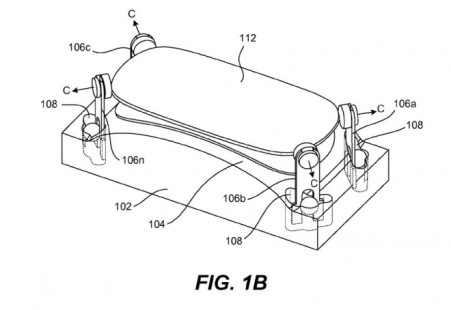 First discovered by Wired, Apple’s patent illustrates a system of using heat during the slumping process to mold glass to a custom shape, as the above image shows. You may think this might mean the next-generation iPhone will have a curved display like other fancy Android smartphones, but this isn’t going to happen. Or at least not anytime soon.

Although Apple is just playing around with the idea of curved glass, the Retina Display is a feature that has made the company’s products so popular, and today the US Patent and Trademark Office has granted Apple two patents that cover this technology, Patently Apple reports.

The first patent relates to LCDs (liquid crystal displays), but more specifically to a coated chassis for an LCD, which is made from a non-conductive material, and could reduce or prevent noise in the device’s antenna usually caused by the LCD, as the description highlights.

The second Retina Display-related patent reveals a panel having an array of metal oxide TFTs, and by providing reduced RC loading and parasitic capacitance, it can deliver an improved overall image quality.