Apple may opt not to upgrade the iPhone’s rear camera in terms of megapixels, but a recently granted patent shows the company is indeed working on an optical image stabilization system. 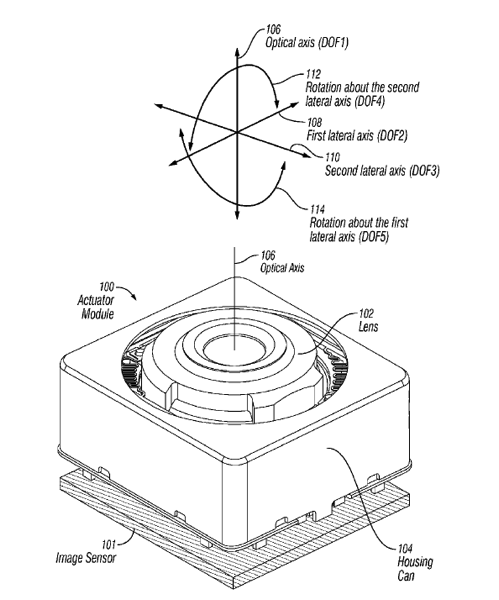 The patent for a “VCM OIS Actuator Module” was published yesterday by the US Patent and Trademark Office, and spotted by Unwired View. It describes a system Apple could add for optical image stabilization (OIS) and enhanced autofocus (AF) for the iPhone’s rear camera.

The actuator module further incorporates an OIS mechanism configured to shift the lens carrier (and, in one embodiment, the AF mechanism attached to the lens carrier) in directions orthogonal to the optical axis. Such motions can substantially correct for handshake motions in the center of the image. Using this method of OIS, the associated image sensor substrate can remain stationary, substantially simplifying the camera manufacture, size and packaging in the mobile handheld device. The OIS mechanism may include, among other features, four separate coils and four separate magnets positioned at corners of an OIS base member. The OIS base member may be dimensioned to be positioned below the lens carrier. The OIS coils may be positioned orthogonal to the AF coils so that they shift the lens carrier in directions orthogonal to the optical axis.

When Apple introduced the iPhone 5s, the tech world was expecting to see a rear camera with at least 12 MP. Instead, Apple stuck with a 8 MP sensor, but provided software-based image stabilization to reduce noise and motion from shaking hands or moving objects. The updated iSight camera also has a larger sensor, bigger pixels, and an aperture of f/2.2, which lets in more light.