Apple has decided to limit the terms of one of the patents successfully asserted in the $1 billion verdict against Samsung. First reported by Florian Müller of Foss Patents, Apple filed a so-called “terminal disclaimer” with the US Patent Office yesterday, as a reply to the Samsung motion claiming Apple’s US Patent No. D618,677 is invalid for obviousness-type double patenting over US Patent No. D593,087. 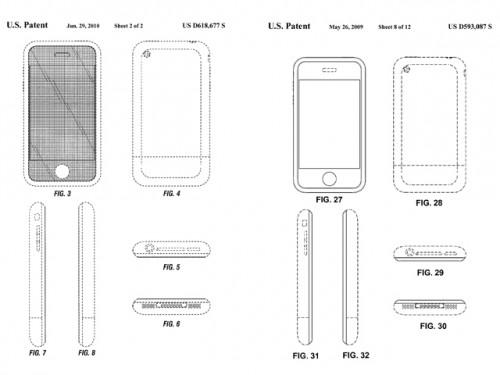 In other words, Apple stepped back for the first time, as it feels threatened by Samsung’s motion. The South Korean company is arguing that the two patents ‘D807 and ‘D677 are too similar to be granted as separate patents. Apple’s filing clarifies, though, that its terminal disclaimer doesn’t constitute an admission of invalidity.

Apple has good reason to feel threatened: if the asserted D’677 patent is found to be invalid, about half of the $1 billion verdict might have to be vacated. The reasoning is obvious: the majority of the products violating the D’677 patent were cleared of infringing the D’087 patent, despite the two Apple patents being pretty much identical.

“Since Samsung argued that the D’677 patent and the D’087 patent are pretty much identical (to the extent that their co-existence amounts to double-patenting), Apple would have a strong point if it argued that double patenting is irrelevant to the damages figures relating to products that were found to infringe both these design patents. But the list of products accused of infringing the D’087 patent was shorter. The Galaxy S (i9000), Galaxy S 4G and Vibrant phone were deemed to infringe both patents. The Galaxy S II (in the AT&T, i9100, Epic 4G Touch and Skyrocket) versions and the Infuse 4G were cleared of infringement of the D’087 patent. The other D’677-infringing products were not even accused of D’087 infringement,” Florian Müller writes.

The next step in the case is the December 6 hearing of both Apple’s and Samsung’s post-trial motions.

Apple is currently on track to double iPhone exports from India by March 2023. This pace was first kickstarted in April and is continuing as India proves to be a major asset in Apple's diversification of its supply chain. In the five-month span since April, Apple has gone on to cross the $1 billion mark...
Steve Vegvari
16 hours ago