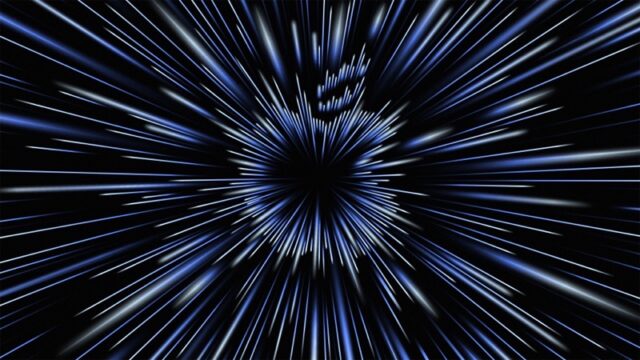 Apple has sent out its invitations to the upcoming ‘Unleashed’ event on Monday, October 18. It appears as though Apple is following its own trend of including a special AR easter egg within the invite once more.

The invitations to the Unleashed event were sent out earlier this week. It’s heavily rumoured that Apple will reveal its new MacBook and AirPods at the event. It didn’t take long before it was discovered that Apple included another AR easter egg within its invitation. The design is reminiscent of the visual of travelling through hyperspace and contains more than the Apple logo when viewed with an iPhone.

As first reported by Creative Bloq, the trails of light begin to travel towards the viewer. The logo then transitions to show “Unleashed” before the date of the event appears. You can try it for yourself by navigating to Apple’s event webpage. When using an iPhone, click on the Apple logo and the short AR easter egg will begin.

Alternatively, Apple SVP Marketing Greg Joswiak posted a short video loop of the AR experience for viewers without an iPhone to check out on Twitter.

Unleashed! These next six days are going to speed by. #AppleEvent pic.twitter.com/0ops2bVPvl

Apple has been on a continuous trend of hiding AR experiences within their event invitations. Last month, the company hid another within the event invite for the iPhone 13 reveal. It’s hard to say what this AR experience alludes to in respect to upcoming devices. The depiction of travelling through hyperspace certainly brings up the notion of fast speeds. Whether this is a tease of what to expect from the rumoured new M1X processor remains to be seen.