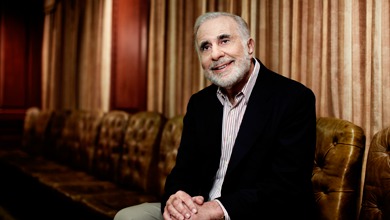 Billionaire investor Carl Icahn has already had dinner with Apple CEO Tim Cook, during which he pushed for a $150 billion stock buyback. It turns out that a private meeting wasn’t quite enough to help Cook change his mind so, after increasing his stake in Apple, Icahn has published an 860-word open letter on his website, The Shareholders’ Square Table (SST), making public the points he presumably raised with Cook during the cordial dinner.

As he highlights in the letter, both of them agreed that Apple’s stock price is undervalued, but this could be just a short-term “anomaly”. Icahn also saluted the $60 billion stock price buyback, but from his perspective as a large Apple shareholder – stock worth $2.5 billion as of writing this article – this isn’t large enough, and for a very simple reason: Apple is sitting on a $147 billion cash pile, and it is expected to generate another $51 billion of IBIT next year, if the Wall Street analyst predictions are correct.

Icahn also publicizes the offer he made during the dinner:

As we proposed at our dinner, if the company decided to borrow the full $150 billion at a 3% interest rate to commence a tender at $525 per share, the result would be an immediate 33% boost to earnings per share, translating into a 33% increase in the value of the shares, which significantly assumes no multiple expansion.  Longer term (in three years) if you execute this buyback as proposed, we expect the share price to appreciate to $1,250, assuming the market rewards EBIT growth of 7.5% per year with a more normal market multiple of 11x EBIT.

As a closing thought, Icahn notes that he isn’t interested right now in participating in the stock buyback, but he also highlights the advantages an immediate $150 billion stock buyback would trigger: a 140% stock appreciation for those who would like to keep their stock.

Fresh off the heels of the launch of Apple's HomePod (2nd-Gen), TF International Securities' Apple analyst Ming-Chi Kuo believes a successor to the HomePod mini 2 could be on its way. In a tweet thread surrounding Apple supplier Goertek, Kuo discussed that the Weifang-based components company has "secured NPI and assembly orders" for the ‌HomePod mini‌...
Steve Vegvari
22 hours ago