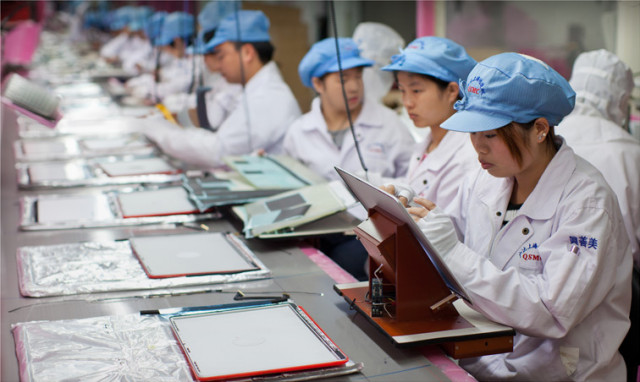 Back in May, Apple said that its suppliers reached 99% compliance with Apple’s 60-hour workweek rule. But, the catch is: China’s statutory limit is 49-hours. With 60-hours per week, Apple is in direct violation of Chinese law.

And there is more, and much worse because the CLW investigation highlights the working hours at the three Pegatron factories at 66 hours, 67 hours, and 69 hours, respectively. Investigators also pointed to factory practices that forces workers to sign forms indicating that their overtime hours were much less than the actual levels.

On its Supplier Responsibility page, Apple said it is committed to providing safe and fair working conditions throughout its supply chain, and its recently formed academic advisory board appears to underscore that.

But the CLW report unveiled there is much work that needs to be done. Apple did confirm that its 15 comprehensive and surprise audits at Pegatron facilities conducted since 2007 revealed that some labor brokers were withholding worker ID cards. Apple demanded them to stop this practice.

As we previously pointed out, Apple allegedly tapped Pegatron — a longtime supplier to the company — to build its lower-cost iPhone. Since last year, the Apple supplier is in charge of building the iPad mini. As a result, Pegatron has expanded its workforce with 20,000 workers since March.

The CLW allegations are severe and it didn’t take long for Apple to react. In a statement obtained by the Wall Street Journal, Apple says the CLW claims are new to the company, and it will immediately start its own investigation. If its audit will find that workers have been underpaid of denied compensation for any time they have worked, Apple will require that Pegatron reimburse them in full.

Below you can read the Apple statement in full.

Apple is committed to providing safe and fair working conditions throughout our supply chain. We lead the industry with far-reaching and specialized audits, the most transparent reporting and educational programs that enrich the lives of workers who make our products. Apple is the first and only technology company to be admitted to the Fair Labor Association, and we are dedicated to protecting every worker in our supply chain.

As a part of our extensive Supplier Responsibility program, Apple has conducted 15 comprehensive audits at Pegatron facilities since 2007, covering more than 130,000 workers making Apple products including annual audits of Pegatron’s final assembly locations and surprise audits at both RiTeng and AVY within the past 18 months.

Additionally, we have closely tracked working hours at all of these facilities. Our most recent survey in June found that Pegatron employees making Apple products worked 46 hours per week on average. Excessive overtime is not in anyone’s best interest, and we work closely with our suppliers to prevent it.

Apple surveys working hours for more than 1 million employees across our supply chain each month and we report the findings on our website.

We have been in close contact with China Labor Watch for several months, investigating issues they’ve raised and sharing our findings. When they first told us that workers’ ID cards were being withheld, an auditor from our Supplier Responsibility program was on site the next day to investigate. We confirmed that labor brokers for Pegatron were holding a small number of IDs as they helped set up bank accounts for those employees. We demanded Pegatron put a stop to this practice and a new system was in place within a week.

Their latest report contains claims that are new to us and we will investigate them immediately. Our audit teams will return to Pegatron, RiTeng and AVY for special inspections this week. If our audits find that workers have been underpaid or denied compensation for any time they’ve worked, we will require that Pegatron reimburse them in full.

Our audits involve a thorough review of timecards and other documents to guard against falsification. We will investigate these new claims thoroughly, ensure that corrective actions are taken where needed and report any violations of our code of conduct. We will not tolerate deviations from our code.

Apple believes in transparency and accountability, both for our suppliers and ourselves. We realize being a leader in workers rights and being transparent with our findings opens us to criticism, but we believe strongly that we can make a big difference in the lives of millions of people by doing so and this provides us the courage and resilience to continue the journey. We are proud of the work we do with our suppliers to uncover problems and improve conditions for workers. By vigorously enforcing our supplier code of conduct, we ensure that our suppliers follow the same principles and values we hold true.

Pegatron also has reacted to the CLW report saying that it will investigate the allegations in full, and will take immediate actions to correct violations to Chinese labor laws and its own code of conduct.

In a recent interview, Apple engineer Esge Andersen discussed how the company achieved improved sound quality regarding the AirPods Pro 2. Much of the improvements came without the integration of lossless audio and it is all thanks to improved airflow instead. Speaking with What Hi-Fi?, Andersen pulled back the curtain about the improvements to audio...
Steve Vegvari
6 hours ago