When the iPad launched three years ago even the obliging reviewers saw it as a vehicle for consumption, not creation. As David Pogue wrote in the New York Times, “The iPad is not a laptop. It’s not nearly as good for creating stuff. On the other hand, it’s infinitely more convenient for consuming it – books, music, video, photos, web, e-mail and so on.” 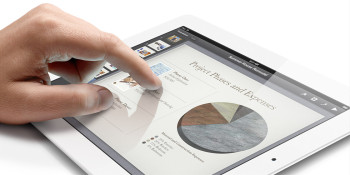 That was three years ago. Since then, a lot has changed. For instance there are about 300,000 apps in the App Store specially designed to take advantage of the iPad’s screen real estate, and the tablet has seen a rapid adoption among consumers and businesses as well.

According to Apple’s recent stats it has sold more than 100 million units, and a quick view of the company’s webpage dedicated to businesses shows positive examples of how the iPad as a post-PC can be integrated into business.

But something remains unchanged: On a “real” PC, the system file is visible, while on the iPad it is hidden. “The act of creating, arranging, accessing files on a PC is trivial and natural,” Jean-Louis Gassée writes in his Monday Note.

On the other hand, on an iPad you don’t navigate a file system, but you launch an app that it has its limitation in terms of documents it understands, and it can’t “see” anything else. Yet the iPad is renowned for its simplicity. Users can read books, download music, email, tweet, and stream movies without an effort, but for some of them the notion of a “file system” is neither natural nor trivial.

However, the jailbreak community has its own answers, and most ‘geeks’ will open up their iPad. Also, there are good apps for viewing much more of your iPad’s file system.

Apple’s decision to hide the iOS file system from iPad (and iPhone) users comforts the non-geek and is consistent with Steve Jobs’ idea that applications such as Mail, iTunes, iPhoto, iCal, and Contacts shouldn’t reveal their files and folders. Under the hood, the application stores its data in the Mac’s file system but, on the surface, the user sees appointments, photo albums and events, mailboxes and messages, Gassée writes.

So which is the right way to go with its future OS for Apple? Sacrifice simplicity for the sake of productivity?

From Gassée’s perspective the easiest decision is no decision.

This places Apple at a fork on the road. On the left is the current path: more/better/lighter/faster of the same. Only evolutionary changes to the simple and successful worldview. This is today’s trajectory, validated by history (think of the evolution of the MacBook) and strong revenue numbers.
On the right, Apple could transform the iPad so that power users can see and combine data in ways that are impossible today. This could attract business customers who are hesitant about making the plunge into the world of tablets, or who may be considering alternatives such as Microsoft’s PC/tablet combo or Android devices with Google services.

The easiest decision is no decision. Let’s have two user interfaces, two modes: The Easy mode for my Mother-In-Law, and the Pro Mode for engineers, McKinsey consultants, and investment bankers. Such dual-mode systems haven’t been very popular so far, it’s been tried without success on PCs and Macs. (Re-reading this, I realize the Mac itself could be considered such a dual-mode machine: Fire up the Terminal app and you have access to a certified Unix engine living inside…)