The final FLA Foxconn verification status report published today found that Apple’s biggest supplier has made significant progress in complying with the 15-month action plans the two companies have created, with 356 of 360 action items completed ahead of or on schedule, but working hours still remain a challenge, accounting for the four remaining action items outstanding. Foxconn is complying with the FLA 60 work hour/week standard, but it failed to fully comply with the Chinese legal limit of 36 hours of overtime per month by July 1, 2013.

The final assessment conducted by independent labor monitoring engaged by the FLA between October 28 and November 8, 2013, found that at the conclusion of the long-term action plan implementation period the overall completion rate was at 98.9%. The inspection was conducted at three of Foxconn’s facilities, employing about 170,000 workers altogether. 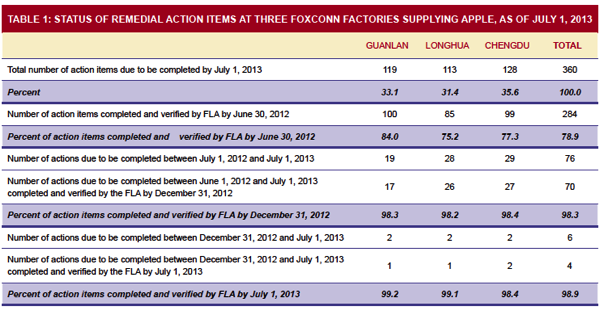 “Foxconn’s compliance with the FLA working hours standard is a significant step in the right direction,” said Auret van Heerden, President & CEO of the Fair Labor Association. “FLA’s expectation is that Apple, working with Foxconn, will continue to rigorously monitor working hours to ensure that they comply with the FLA standard of 60 hours per week but also make progress toward the Chinese legal limit of 49 hours per week. We welcome Foxconn’s commitment to continue working toward achieving its target.”

According to the report, Foxconn’s employees worked no more than 60 hours per week between March and October, except for a seven-week period at the Guanlan facility, where work hours exceeded the FLA’s 60-work-hours standard. In addition, no more than 85,000 workers had worked, on average, beyond the Chinese legal limit of 36 overtime hours during the same March–October period.

While the report is fairly positive, there are still four important items Apple and Foxconn need to fix: the supplier doesn’t comply with Chinese labor laws regarding hours of work. The FLA expects Apple to keep an eye on its suppliers, monitor compliance, and report on an annual basis about their monitoring efforts.