Apple may soon allow users to view their iCloud-synced bookmarks on the web, reports 9to5Mac. The allegations are based on an iCloud glitch that reads “iCloud Bookmarks are coming soon.” 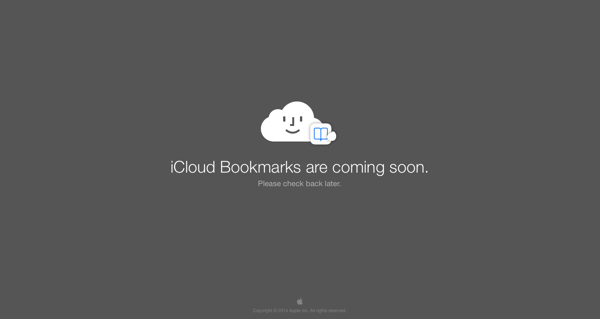 The screen that captured 9to5Mac tipster Dayton’s attention was first noticed by Windows users who tried to install the Chrome extension from the iCloud Control Panel, allowing them to sync Chrome bookmarks with their iDevice(s) using iCloud.

Since the URL slug reads icloud.com/bookmarks_extension and Apple has already released browser extensions for Chrome and Firefox, the only plausible explanation seems to be that Apple users will be to access their bookmarks not only on their iDevice or their own PC, but on other PCs as well, when they log in to their iCloud account. This could be a nice addition to iCloud.com.

Such accidental leaks aren’t new for Apple, but rare. Would you like to be able to access your bookmarks on other computers than your own?