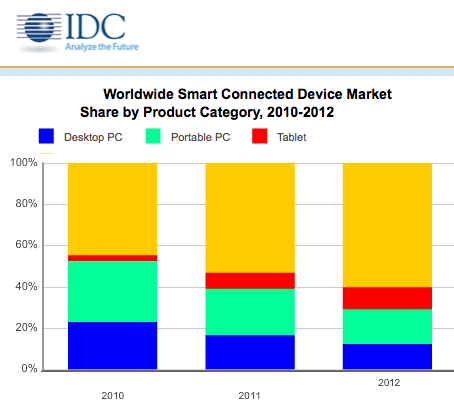 Vendors have shipped 367.7 million smart connected devices during the fourth quarter of last year, with desktop and portable PCs declining 4.1% and 3.4% respectively, while tablets accounted for the largest growth compared to a year ago, rising 78.4%. Smartphones grew by 46.1%, grabbing 60.1% of all devices measured by the IDC Worldwide Quarterly Smart Connected Device Tracker. 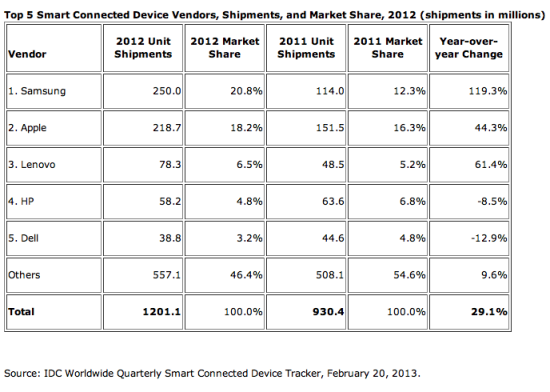 Apple ranked second in the market with a total of 74.8 million units shipped in Q4, up 29.7% compared to a year ago. Looking back over the full calendar year, Apple shipped an amazing 218.7 million units, up 44.3%, while Samsung shipped 250 million units, recording a 119.3% growth on a year-over-year basis.

“The fourth quarter market share numbers showed a fairly dramatic resurgence for Apple,” said Bob O’Donnell, program vice president, Clients and Displays. “After falling well behind Samsung early in 2012, Apple came roaring back in final quarter of the year thanks to its latest hits – the iPhone 5 and the iPad Mini – and reduced the market share gap to less than a single percentage point. The question moving forward will be whether or not Apple can maintain its hit parade against the juggernaut of Samsung.”