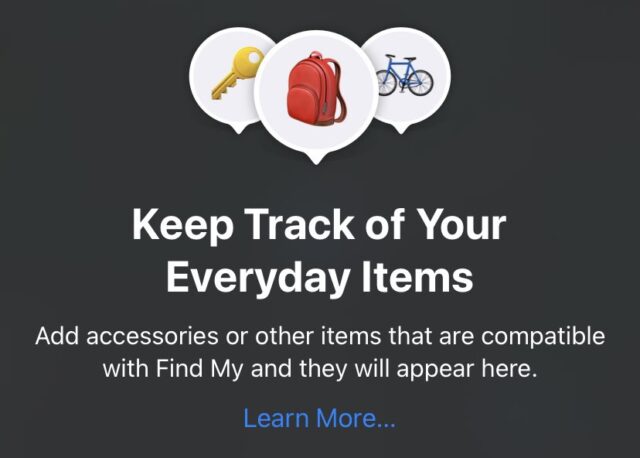 The latest iOS 14.5 beta has included an option to “keep track of your everyday items”. This Items tab is now featured in the Find My setting and enables users to add accessories or other compatible items. The integration with the latest iOS build may be a hint that Apple’s long-rumoured AirTags may be soon approaching.

Apple’s AirTags, the company’s supposed peripheral that can be attached to keys, wallets, etc. for tracking purposes, is no big secret. Numerous reports surrounding Apple’s Tile competitor have surfaced over the many months. Though, Apple itself has not officially announced such a product.

iOS 14.3 gave us our first true glimpse that the product’s release may be incoming as internal code was discovered for AirTage support. Now, as reported by 9to5Mac, the iOS 14.5 developer beta has given us a real look at the integration within the Find My app. Twitter user IceCool Tech discovered that upon opening the Find My app for the first time within the iOS 14.5 beta, a new Items tab is featured.

Was this in beta 2? pic.twitter.com/EdgkKrWc4U

Aside from AirTags, the Items tab is likely designated to third-party iPhone and iPad accessories such as Beats headphones and other non-Apple headsets and earbuds.

AirTags are rumoured to be announced in the next short while. Weeks ago, Apple leaker Jon Prosser posted a tweet indicating that the product may finally be released sometime in March. However, Prosser did note that he has not heard any further details.

It’s been said that the tracking device will utilize Ultra-Wideband technology for accurate location tracking. The use of UWB will rival Tile’s latest tracker which also features the same precise location technology.