The State of Mobile Advertising report signed by Opera (via The Next Web) shows that Android has recorded an impressive growth in terms of ad impressions, but iOS users bring most of the profit to mobile advertisers, with Canada ranking No. 6 among the top 20 countries by impressions.

The fourth quarter wasn’t just a record quarter for Apple: it represented a more than two-times increase in impressions and revenue to publishers compared to any other quarter of last year.

Although Android takes the lead in mobile phone impressions by volume, Apple’s iOS continues to outperform any other mobile platform in terms of monetization, as it leads the group with the highest rate of clicks (eCPM) on Opera’s system. 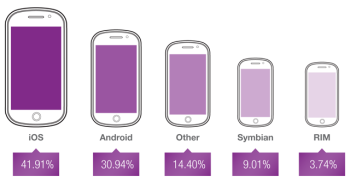 Turns out the iPad retains the best value for advertisers: although it grabbed only 5.82% of total traffic, in terms of revenue it generated 10.49% of the total, while the iPod Touch has the least effective conversion rate.