Looking back on the twentieth century (not Fox) there are two big names in business who changed the way we shop and interact, and they even marked the way we work and live. Yes, I am referring to Steve Jobs and Sam Walton: Jobs was the mind behind what is now the world’s most valuable company, and Walton created the biggest company in the world. 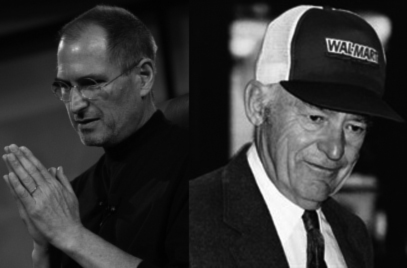 Interestingly enough though, the two key figures of twentieth (and twenty-first) century business were totally different, yet they were similar as well: great showmen, extreme charismatics, obsessed with competition, iconoclast, relentless and tough on the people around them, as Andy Serwer of Fortune notes in an interview with Walter Isaacson and John Huey.

But how did they rise to be the greatest business leaders in history? They didn’t live by the rules.

They also followed their own ways of doing business: Walton wasn’t a reflective person, he always looked ahead, while Steve Jobs saw himself as a philosopher and an intellectual. While Walton always looked at the numbers Jobs always focused on the product. He said: “If you keep your eye on the profit, you’re going to skimp on the product. But if you focus on making really great products, then the profit will follow.” And it did.

The differences between the two iconic figures and their way of doing business is well pictured by Huey and Isaacson:

“Sam would take his executives around to the worst store that he could come up with, and he would say, “This is a horrible store. I want everybody to come out of there with one thing they do better than we do because everybody does something good. And there’s something in there that we could do,” John Huey said.

“For his store he took out a design patent on that staircase, and his name is on that patent, and most of the major Apple Stores now have them. He said, “You want that stairway so people believe they’re in someplace magical,” according to Walter Isaacson.

And they both thought that the normal rules didn’t apply to anything. And they broke the rules just to create a digital revolution (Steve Jobs) and to reform the distribution business (Sam Walton).

“Genius” is a word thrown around pretty loosely and shouldn’t be, but if it applies to anybody, it applies to Steve Jobs. He actually wasn’t the smartest person in the digital revolution. Bill Gates had more conventional mental-processing power than Steve did in terms of analyzing information and data. But Steve Jobs had an intuitive genius, and that genius comes not just from being smart but from being imaginative and creative. And making leaps that come from thinking differently.