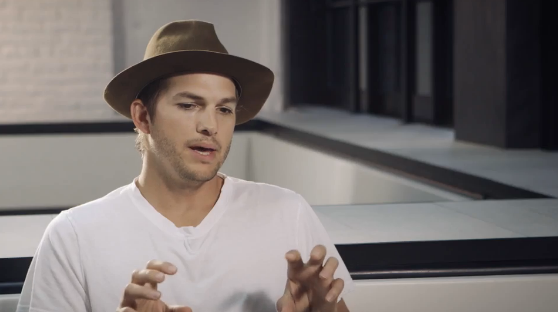 While some of us are counting the days until the release of the Steve Jobs biopic, Jobs which is set for August 16, here are two interviews with Ashton Kutcher, sharing his thoughts about what it meant to him playing one of the most influential persons in technology.

Ashton Kutcher sat down to talk with The Verge’s Joshua Topolsky and was invited to “The Tonight Show with Jay Leno.” Speaking with Joshua, Kutcher said that portraying Jobs on-screen was a personal challenge. “It terrified me, and most of the great things I’ve been able to accomplish in my life were things that terrified me,” he said.

While he didn’t have the chance to meet Jobs in person, many of his friends had worked with Jobs, so he had the advantage of obtaining a unique insight into Jobs’ life. Kutcher made extraordinary preparations for the role, which even include a 15-hour SoundCloud compilation of Apple co-founder’s voice both in public and candid recordings.

He points to the two versions of Jobs: there was the Steve Jobs we have seen on stage, and there was the other guy, who was in the boardroom, who was working on a product.

To prepare for the role, Kutcher assembled a 15-hour SoundCloud compilation of Jobs’ speaking voice, including both public presentations and more candid recordings that captured his habits outside of public life. “There were two versions of him, and I got this from a lot of friends of his that I talked to,” Kutcher said. “There was the guy who went on stage and presented things, and then there was the guy who was in the boardroom, who was working on a product, who was having an intimate conversation. And I tried to find little snippets of stuff where he wasn’t aware that he was being recorded or speeches that he didn’t think anyone was going to hear, so I could get a little more of who he honestly was.”

You can check out the videos below. Are you awaiting the Jobs release?