Apple’s design chief, Sir Jonathan Ive, who is now responsible for the look and feel of the company’s software user interfaces as well, was honoured with a gold Blue Peter badge by the BBC’s Blue Peter program. 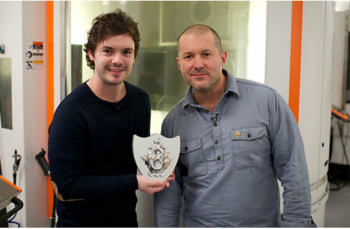 While this badge makes little sense to Canadian readers, UK readers will see the accolade as being as significant as the knighthood he received last May. Jony Ive was presented with the gold badge by Barney Harwood, one of the show’s presenters, as part of a special Blue Peter edition on gadgets, which will be broadcast this Saturday, offering advice to the viewers.

Ive called the honour “absolutely incredible” and presented the show with his own version of the Blue Peter badge made of solid aluminum, manufactured with Apple”s equipment, using the program’s catchphrase: “Here’s one we made earlier”.

Ewan Vinnicombe, Acting Editor of Blue Peter, comments: “Sir Jonathan Ive is an inspiration to children around the world and we were ecstatic to hear his comments and design advice to our viewers who will remember such feedback for a lifetime.”

Blue Peter was first broadcast in 1958, and is the world’s longest-running kid’s TV show. Only about 1,000 badges have been presented during its history and Sir Jonathan Ive has now joined an illustrious list which includes David Beckham, J.K. Rowling, Tom Daley, Damian Hirst and the Queen.