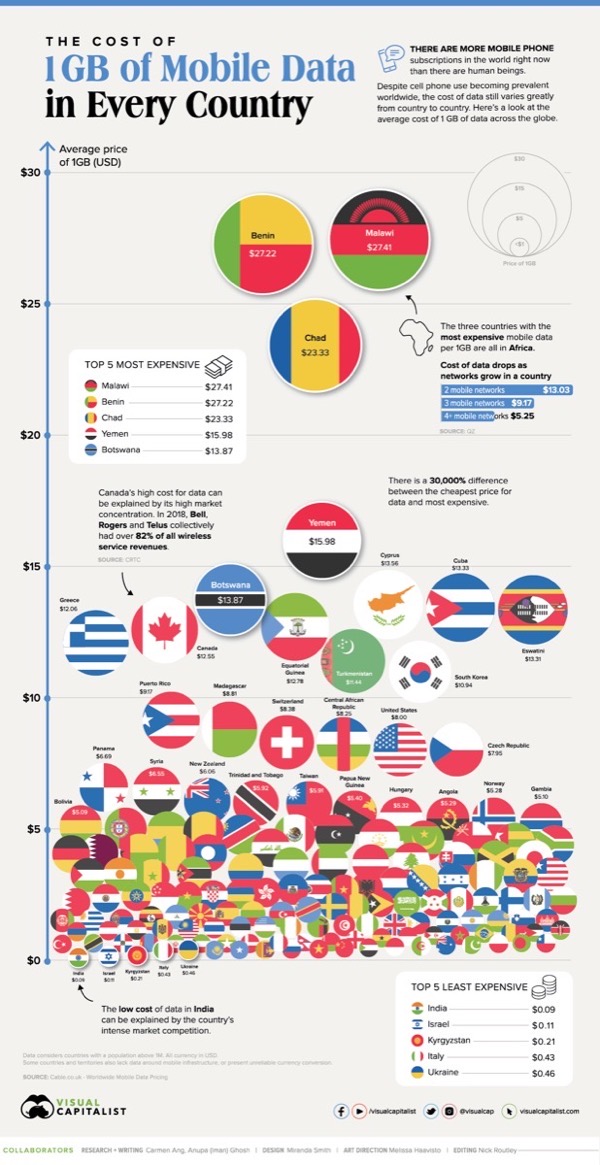 The latest infographic created by Vancouver-based Visual Capitalist (via Jim Harris), details the average cost of 1GB of mobile data in every country worldwide.

When it comes to Canada, Visual Capitalist says our “high cost for data can be explained by its high market concentration. In 2018, Bell, Rogers and Telus collectively had over 82% of all wireless service revenues,” based on CRTC data.

Cost of 1GB of mobile data

For customers of Telus-owned Koodo, data overages are billed at $130/1GB, while Bell-owned Virgin Plus charges $137/1GB for data overages. These charges apply if you agree to pay for more data when your plan’s amount is consumed.

Earlier this year, Finland’s Rewheel Research noted Canada’s wireless pricing for 20GB data is the most expensive in the world. Sweden’s Tefficient reported in July Canada’s mobile data prices were the most expensive in the world. Despite these reports, Canada’s telecom lobby group, the CWTA, pushes back to say download speeds for Canada remain faster than other countries, including the likes of India.

Update: corrected the story to note the infographic was created by Visual Capitalist, and not Jim Harris.

Darren Entwistle, President and CEO of Telus, wants Ottawa to relax foreign-ownership rules for large telecommunications companies — reports The Globe and Mail. Entwistle has asked the same of the federal government in the past, but he is now renewing his argument as the Canadian telecom scene goes through a new wave of consolidation with...
Nehal Malik
16 hours ago