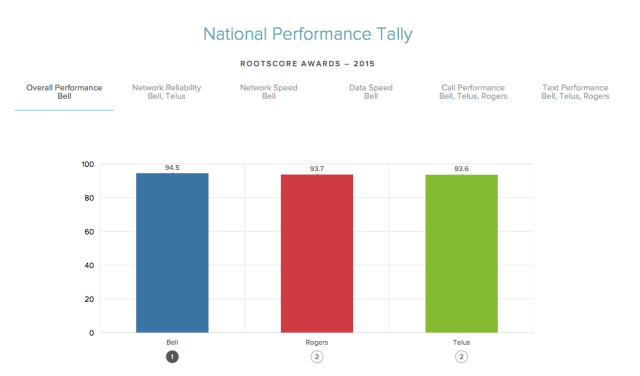 Bell barely edged out Rogers and Telus in overall performance across Canada, according to the new RootMetrics 2015 Canadian Mobile Network Performance Review. What propelled Bell to the top position was its more consistent top speeds, especially in roadway testing between cities, and slightly better reliability in data testing, the RootMetrics verdict reads.

To gather the results, RootMetrics testers travelled 30,000 kilometres across the country and evaluated the Big Three’s networks alongside the network performance of regional carriers — Videotron and Wind — where available. Overall, they collected 214,000 call, data, and text samples both outdoor and in more than 500 indoor locations. The result was an unbiased real-world picture of the Canadian carriers’ network performance.

As you can see from the above image, Bell took first place, edging out Rogers and Telus in overall performance, network speed, and data performance (Bell tied for first in network reliability, call performance, and text performance).

Interestingly, Telus ranked third despite sharing spectrum and towers in most of Canada. According to RootMetrics, a number of factors influence network performance, including the network itself, internet switching, and other provisioning decisions. The main difference between the two carriers is that while Telus performed well during the tests, it did not deliver top speeds as consistently as did Bell, especially in roadway testing.

Rogers, on the other hand, ranked second, and RootMetrics highlights that the carrier recorded 86.3% of its download tests on LTE, which reveals a mature LTE infrastructure.

When it comes to the metropolitan-area coverage (RootMetrics tested performance in Calgary, Edmonton, Montréal, Ottawa, Quebec City, Toronto, Vancouver, and Winnipeg in this round), apparently Canadian metros outshine American and UK cities due to the spectrum-rich environment, the report says.

As for Videotron, the test results show extremely fast speeds — 41 Mbps median download speed in Montreal — and thanks to the network-sharing agreement with Rogers, the carrier provides fast speeds and strong data reliability where it operates. 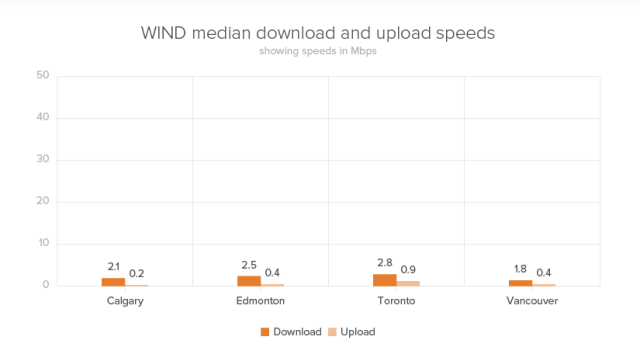 WIND continues to fail in such performance tests. RootMetrics notes that it still has a lot of ground to make up where it operates. With no LTE coverage, Wind turned out to be the slowest network in the tests, as it never exceeded 2.8 Mbps for median download speeds in any market.