Bell Crowned ‘Fastest Mobile Network’ in Canada for 2021 by PCMag

PCMag‘s annual ‘Fastest Mobile Networks Canada’ competition has finally come to a close, and Bell Canada Enterprises (BCE) Inc. has been crowned the champion for 2021, the publication told iPhone in Canada in an email.

Early last month, PCMag‘s Sascha Segan and his team started driving across Canada to test mobile network speeds in the country’s 20 most populated cities, from Halifax to Victoria.

With an average download speed of 241.8 Mbps, average upload speed of 43.2 Mbps, and average latency of 25.1 ms, Bell was named Canada’s Fastest Mobile Network for the second year in a row by PCMag.

The publication ceded that the competition between Bell and 2019 winner Telus for first place was unbelievably close, and that Bell took the title by the skin of its teeth.

Bell and Telus each won 8 of the 20 cities PCMag ran tests in, and network properties like average download/upload speeds were used to break the tie. 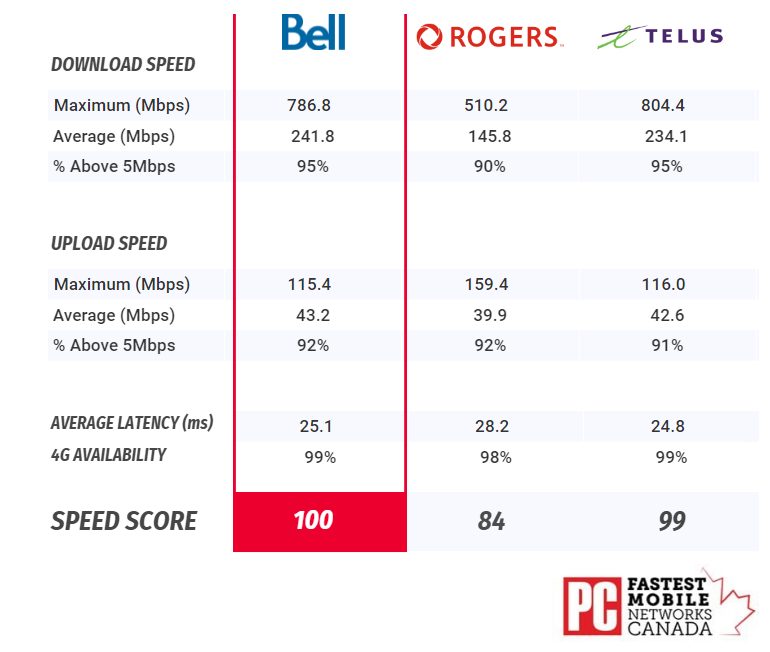 What’s more, PCMag found cellular speeds in Canada to be faster than U.S. networks yet again. Wireless may not be getting any cheaper in Canada anytime soon, but at least we have that going for us.

Here are some other highlights from the experiment:

“On behalf of our customers, team and partners, Bell is proud to be named Canada’s fastest national mobile network for the second year in a row by PCMag,” said Claire Gillies, President of Bell Mobility, in a statement.

Complete results and the publication’s analysis of the competition are available on PCMag‘s website.

Staples Canada and Bell announced a multi-year exclusive agreement on Tuesday, to sell Bell, Virgin Plus and Lucky Mobile wireless and wireline services at Staples stores across Canada for both consumers and small businesses. Both companies will also partner to sell Bell services to medium businesses through the Staples Professional sales team. Beginning in late […]
Gary Ng
1 hour ago