It appears Bell has been texting its customers asking for feedback, asking how likely they would recommend the company based on “overall experience” with their services. The scale was from one to five, with one being “Not at all” and five being “Definitely”.

When one supporter of OpenMedia, the non-profit group dedicated to “keep the Internet open, affordable, & surveillance-free,” responded with a dismal ‘one’ rating, the Bell bot or human responded “Is there anything we can do to make your experience better?”

That’s when the OpenMedia supporter said “Not be an oligopolistic exploiter of a captive audience. Be chill with MNVOs. Support a subsidy pool for rural broadband. Not buy MTS.” Ouch. 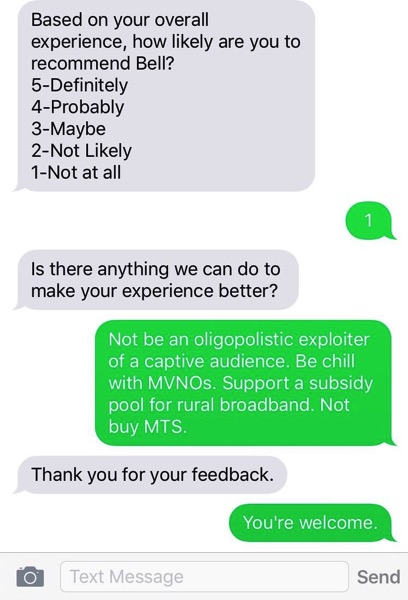 Despite this response, the most likely automated responder just said “Thank you for your feedback.”

Earlier today, the Competition Bureau announced Bell had settled an unwanted premium text lawsuit, which will see the company pay back up to $11.82 million to Canadians.

You have to love it when Canadians get all polite, even when giving brutally honest feedback.